This dish’s origins lie in its name – Gallipoli. It dates back to medieval times when the town came under siege by various Meditarrenean authorities. Inhabitants of Gallipoli took refuge behind the city walls and therefore needed to find ways to prolong the life of some foods. That’s where Scapece comes in… Pickled fish. An important fishing centre, Gallipoli used its rich maritime produce to supply a food that would last over time. Scapece involves layering small fish with vinegar, breadcrumbs and saffron, which is left to marinade.

It’s roots might lie in necessity, but today it is sold in big barrels at market squares in Gallipoli. I have to say I’m not a big fan of this dish, even though I really want to be. I guess it might be because I’m not eating it on a beautiful Salentine beach watching fishermen bring their daily catch in whilst the sun hits my face. Or maybe, I just don’t like it. I will give it another go when I visit Gallipoli later this year. 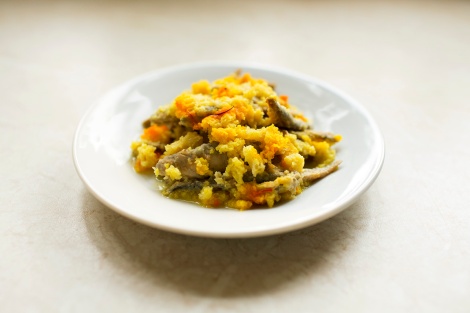 A pinch of saffron

A pinch of Turmeric for colour

*The original recipe uses powdered saffron, which is impossible to find/buy in the UK. I used some saffron strands and added a little turmeric to get the colour. Don’t add too much though as you will start to taste the turmeric.

*You don’t need the bone the fish because they’re small and the marinade will soften them.