The annual trip to Salento was going to be different this time. I was a newly fledged Vegan. No calamari or mozzarella for me. Could I do it? Actually yes I could! Any very easily. All the produce is so incredibly delicious in Salento with a heavy focus on vegetables. And the beans! So many beans. After all, Salento is known for its Cucina Povera (poor kitchen) And that’s where my new favourite dish of the trip came in – the humble cannellini bean.

Words can’t really describe how amazing they tasted. Buttery, creamy and melt in the mouth. One morning my auntie called me over to give me some food. She ladled the golden buttery beans into a big bowl and told me before eating them pour olive oil all over them – sounded good to me! That evening when we sat down to eat them we could not stop. Seconds then thirds. They made us feel amazing!

I often daydream about those beans. And that’s why I’ve tried to recreate them at home. We spoke lots about veganism on that trip, I’d only started eating vegan a few weeks before our holiday. “But It’s going to be so hard for you to not have the fish or what about the burrata”?! But when reflecting back on the trip, what do you think everyone’s favourite dish was? The cannellini beans! Plant Power!

I have to admit the beans I made here in the UK don’t taste as good as those in Italy. You just can’t beat handpicked beans from a local farmer. They were also a lot smaller then the ones we are used to over here. So if you can get your hands on some young dried cannellini beans I think they will be much tastier. 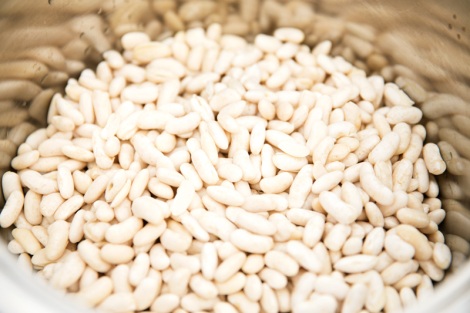 A generous pinch of oregano

A generous pinch of sea salt and pepper